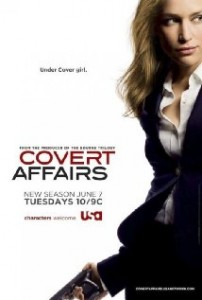 Last summer the USA Network premiered a new show, Covert Affairs. It revolves around Annie Walker (Piper Perabo) a CIA agent who is juggling her personal life and professional life in the CIA.  Auggie Anderson (Christopher Gorham) is Annie’s support agent, once a Special Forces Operative, now blind, he assists agents with backend support and is more than willing to get into trouble with Annie.  Ben Mercer (Eion Bailey) is Annie’s love interest who was once a CIA agent and now thought to be a rogue agent.  The cast is rounded out by Peter Gallagher and Sendhil Ramamurthy to name a few.

As far as first seasons go, I think that Covert Affairs hit a home run and I really hope that season 2 is just as good.