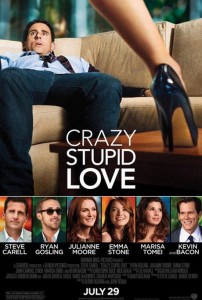 Crazy, Stupid, Love is a movie about a dad who’s life is falling to pieces, and he is trying to put the pieces back together.  Cal (Steve Carell) and his wife Emily (Julianne Moore)have been married for 25 years and on the way home from dinner she tells him she wants a divorce.  Not only does she want a divorce but she openly tells him she has slept with another man, a man from  her office, an accountant (Kevin Bacon).

Cal and Emily have two children, Robbie (Jonah Bobo) and Molly (Joey King).  Robbie has a HUGE crush on his babysitter (Analeigh Tipton) and trys to profess his love for her, but she won’t listen.  Cal moves out and goes to the bar to drown his sorrows and to attempt to meet new women.  Cal is not successful in meeting women until he is befriended by a Ladies Man, Jacob (Ryan Gosling).  Jacob transforms Cal into a Ladies Man by giving him a wardrobe and style makeover.  Hannah is a recent law grad who is studying for the bar exam and meets Jacob in the bar one night.  However Hannah is the one girl who does not fall for Jacobs lines or good looks and does not go home with him after their first meeting.

Cal is successful in taking several women home from the bar.  One woman turns out to be one of Robbie’s teachers (Marisa Tomei).  Needless to say parent teacher conferences are tense and do not turn out the way Cal was expecting.  Cal soon figures out that being a Ladies Man is not what he wants, he wants his wife back.

Jacob has been a successful Ladies Man for years.  One night while hitting on women Hannah comes into the bar, frustrated by her boyfriend, and turns the table on Jacob.  They go home together and rather than having a one night stand, they end up having a relationship.

The constant theme in this movie is “fight for your soul mate”.  Cal uses this line when taking about his failed marriage and his attempts got win his ex-wife’s heart back.  Robbie uses it when talking about why he continues to profess his love for his babysitter.

If you have seen the trailers for this movie, you have seen the first 30 minutes of the movie.  There are some funny scenes in this movie but over all it is flat.  I had a hard time deciding if this movie was a drama or a comedy.  While watching the relationship between Cal and Jacob I could not help but think about “The Pickup Artist” that VH1 aired years ago.  I would not see this movie in theater, wait for it to come out on rental.