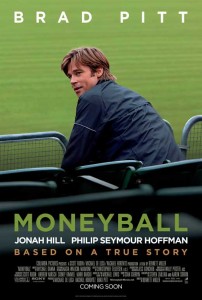 Moneyball is about the 2002 Oakland Athletics and the attempt by General Manager Billy Beane’s (Brad Pitt) attempt to rebuild the team after their three largest stars left the team due to free agency.  At the end of the 2001 season the A’s lost Jason Giambi, Johnny Damon, and Jason Isringhausen leaving big gaps in the lineup.  Beane needs to fill the empty spots, but the A’s ownership is not willing to spend any more money.

During a trip to to Cleveland for trade talks he meets Peter Brand (Jonah Hill).  The Indians GM would only answer trade request after Brand weighed in.  After the meeting Beane wanted to find out who Brand was and what made him so special.  In a parking garage conversation Beane realizes that Brand bases all his roster changes on statistics and a theory by Bill James.  Beane hires Brand and the two start making roster changes based on statistics rather than scouting reports, raising the ire of people around baseball.

The most questionable move that Beane makes is when he signs a catcher, Scott Hatteberg (Chris Pratt), with a blown arm as a first basemen.  Hatteberg has never played first base, and this gets the attention of the entire league.  One of the biggest detractors is the Oakland A’s head coach Art Howe (Philip Seymour Hoffman).  Howe does not like what Beane has done to the roster and refuses to play the players in the order and positions that they were acquired to play.

As the season goes on Howe catches on, and starts to follow Beane’s master plan.  It isn’t a secret that the A’s went to the American League Divisional Series and played against the Yankee’s in 2002.  Beane had managed to create a team that, per game, was being paid about $200,000, while the Yankee’s were paying over $1 Million per game for their team.  This gave validity to Beane, Brand, and James’ theory.  After the season Beane is courted by the Boston Red Sox to rebuild their team for the 2003 season. 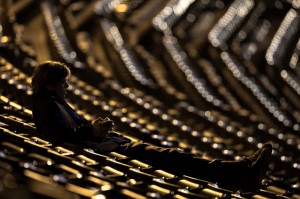 Overall this was a great movie.  Pitt, Hill, Hoffman and other give GREAT performances in this movie.  The director (Bennett Miller) uses odd camera angles and, at times, complete silence to portray intensity.  There may be a few Oscar Nominations for this movie.  However, there is one glaring issue with the story.  Beane has a daughter and at one point he and his daughter are sitting in a guitar shop looking for a new guitar for his daughter.  She picks up a guitar and Beane asks her to play a song for him.  She starts humming and strumming a song that she says she wrote.  Later in the movie Beane is listening to a cd his daughter made for him, and she is singing the song she wrote.  The song was “The Show” by Lenka.  Here is the issue, this song was written by Lenka, and was not released until 2008, the movie takes place in 2002.

One of the best drama’s of the summer