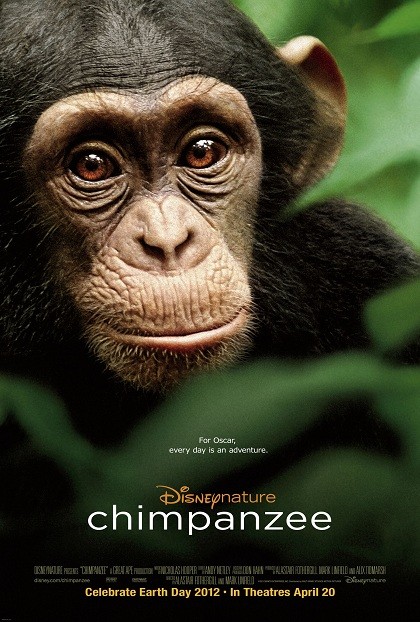 Disneynature takes moviegoers deep into the forests of Africa with “Chimpanzee,” a new True Life Adventure introducing an adorable baby chimp named Oscar and his entertaining approach to life in a remarkable story of family bonds and individual triumph. Oscar’s playful curiosity and zest for discovery showcase the intelligence and ingenuity of some of the most extraordinary personalities in the animal kingdom. Working together, Oscar’s chimpanzee family–including his mom and the group’s savvy leader — navigates the complex territory of the forest. The world is a playground for little Oscar and his fellow young chimps, who’d rather make mayhem than join their parents for an afternoon nap. But when Oscar’s family is confronted by a rival band of chimps, he is left to fend for himself until a surprising ally steps in and changes his life forever. Directed by Alastair Fothergill (“African Cats” and “Earth”) and Mark Linfield (“Earth”), “Chimpanzee” swings into theaters on Earth Day 2012.
In theaters: April 20th, 2012

When John Fleton, a depressed suburban family man and recently fired realtor, offers to help a stranger, Richie, with his car, John is sucked into a surreal, nightmarish murder spree that forces him to question everything about his life, his mode of behavior, and the very nature of evil…
In theaters: May 4th, 2012

From the team that brought you “YOU GOT SERVED” comes a young Hip-Hop dance battle movie for a new generation of dance. Battlefield America takes a steady look at the underbelly of the youth battle dance culture in Long Beach, California. Sean Lewis, a young, charismatic, successful businessman finds himself in the mix with a bunch of disheveled misfits Bad Boys, who have virtually no dance talent. Realizing his dilemma, Sean brings aboard a professional dance instructor to ease his responsibilities to these kids. Meanwhile, he finds himself falling for Sara, who runs the community center where the kids hangout and practice their moves. With Sean motivating them, The Bad Boys find the confidence to be contenders…
In theaters: June 1st, 2012