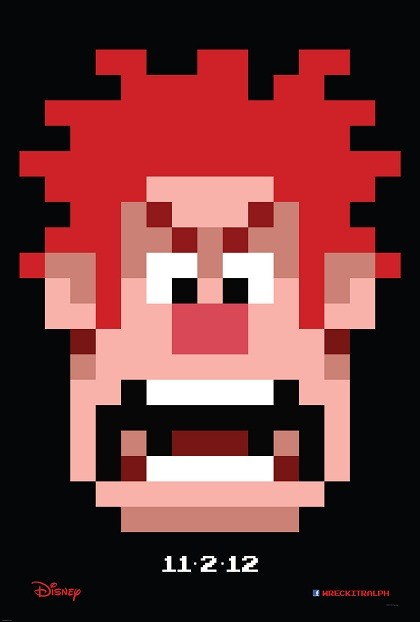 Walt Disney Animation Studios and Emmy(R)-winning director Rich Moore (TV’s “The Simpsons,” “Futurama”) take moviegoers on a hilarious, arcade-game-hopping journey in “Wreck-It Ralph.” Ralph (voice of John C. Reilly, “Talladega Nights: The Ballad of Ricky Bobby,” “Step Brothers”) is tired of being overshadowed by Fix-It Felix (voice of Jack McBrayer, “30 Rock”), the “good guy” star of their game who always gets to save the day. But after decades doing the same thing andseeing all the glory go to Felix, Ralph decides he’s tired of playing the role of a bad guy. He takes matters into his own massive hands and sets off on a game-hopping journey across the arcade through every generation of video games to prove he’s got what it takes to be a hero. On his quest, he meets the tough-as-nails Sergeant Calhoun (voice of Jane Lynch, TV’s “Glee”) from the first-person action game Hero’s Duty. But it’s the feisty misfit Vanellope von Schweetz (voice of Sarah Silverman, “The Sarah Silverman Program”) from the candy-coated cart racing game, Sugar Rush, whose world is threatened when Ralph accidentally unleashes a deadly enemy that threatens the entire arcade. Will Ralph realize his dream and save the day before it’s too late?
In theaters: November 2nd, 2012

Set in the South two years before the Civil War, DJANGO UNCHAINED stars Academy Award(R)-winner Jamie Foxx as Django, a slave whose brutal history with his former owners lands him face-to-face with German-born bounty hunter Dr. King Schultz (Academy Award(R)-winner Christoph Waltz). Schultz is on the trail of the murderous Brittle brothers, and only Django can lead him to his bounty. The unorthodox Schultz acquires Django with a promise to free him upon the capture of the Brittles–dead or alive.
In theaters: December 25th, 2012

How to Survive a Plague

HOW TO SURVIVE A PLAGUE is the story of the brave young men and women who successfully reversed the tide of an epidemic, demanded the attention of a fearful nation and stopped AIDS from becoming a death sentence. This improbable group of activists bucked oppression and, with no scientific training, infiltrated government agencies and the pharmaceutical industry, helping to identify promising new medication and treatments and move them through trials and into drugstores in record time. In the process, they saved their own lives and ended the darkest days of a veritable plague, while virtually emptying AIDS wards in American hospitals in the process. The powerful story of their fight is a classic tale of empowerment and activism that has since inspired movements for change in everything from breast cancer research to Occupy Wall Street. Their story stands as a powerful inspiration to future generations, a road map, and a call to arms. This is how you change the world.
In theaters: September 21st, 2012