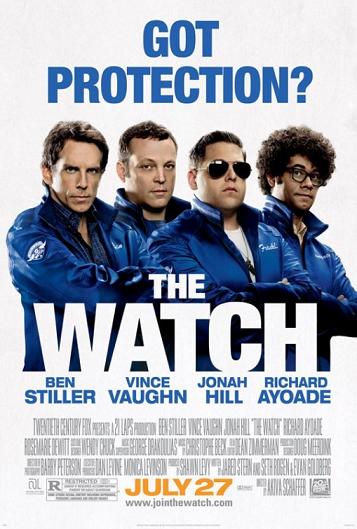 The Watch is about Evan who is one of the floor managers at the local Costco in Ohio. One night a mysterious murder occurs killing one of his good friends at the store.

Since the cops are of no use, he decides to get together a “Neighborhood Watch” to solve the murder of his friend. Sadly, he gets only 3 respondents to his several flyers that he posted everywhere. So, he ends up with them as a part of his watch. Unfortunately for him, they just want to hang out and drink some beers.

He finally convinces the three to come with him to find the murderer of his friend. They end up finding other mutilated bodies, a strange green substance, and a metal ball the shoots lasers. Is it something from out of this world killing people in the neighborhood?

This movie was actually pretty funny. I was actually surprised how much this made me laugh. I was very happy to see Richard Ayoade in this movie. He was very funny on the IT Crowd and yes funny every time he’s on screen here. This movie combined sci-fi and comedy very well for a solid movie.