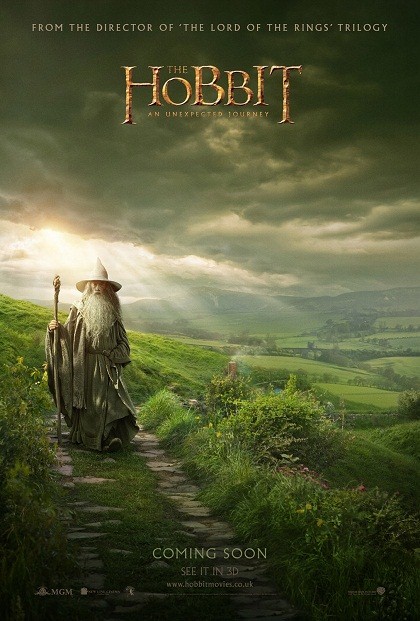 The Hobbit: An Unexpected Journey

The adventure follows the journey of title character Bilbo Baggins, who is swept into an epic quest to reclaim the lost Dwarf Kingdom of Erebor from the fearsome dragon Smaug. Approached out of the blue by the wizard Gandalf the Grey, Bilbo finds himself joining a company of thirteen dwarves led by the legendary warrior, Thorin Oakenshield. Their journey will take them into the Wild; through treacherous lands swarming with Goblins and Orcs, deadly Wargs and Sorcerers. Although their goal lies to the East and the wastelands of the Lonely Mountain, first they must escape the goblin tunnels, where Bilbo meets the creature that will change his life forever…Gollum. Here, alone with Gollum, on the shores of an underground lake, the unassuming Bilbo Baggins not only discovers depths of ingenuity and courage that surprise even him, he also gains possession of Gollum’s “precious” ring that holds unexpected and useful qualities… A simple, gold ring that is tied to the fate of all Middle-earth in ways Bilbo cannot begin to know.
In theaters: December 14th, 2012

A supernatural love story set in the South, “Beautiful Creatures” tells the tale of two star-crossed lovers: Ethan (Alden Ehrenreich), a young man longing to escape his small town, and Lena (Alice Englert), a mysterious new girl. Together, they uncover dark secrets about their respective families, their history and their town. Oscar(R) nominee Richard LaGravenese (“The Fisher King,””P.S. I Love You”) directs from his adaptation of the first novel in the best-selling series by Kami Garcia and Margaret Stohl.
In theaters: February 13th, 2013

For a decade, an elite team of intelligence and military operatives, working in secret across the globe, devoted themselves to a single goal: to find and eliminate Osama bin Laden. Zero Dark Thirty reunites the Oscar(R) winning team of director-producer Kathryn Bigelow and writer-producer Mark Boal (The Hurt Locker) for the story of history’s greatest manhunt for the world’s most dangerous man.
In theaters: December 19th, 2012

Based on the groundbreaking video game franchise, SILENT HILL: REVELATION 3D is the sequel to the hit film SILENT HILL. In SILENT HILL: REVELATION 3D, Heather Mason (Clemens) and her father (Bean) have been on the run, always one step ahead of dangerous forces that she doesn’t fully understand. On the eve of her 18th birthday, plagued by horrific nightmares and the disappearance of her father, Heather discovers she’s not who she thinks she is. The revelation leads her deeper into a demonic world that threatens to trap her forever.
In theaters: October 26th, 2012