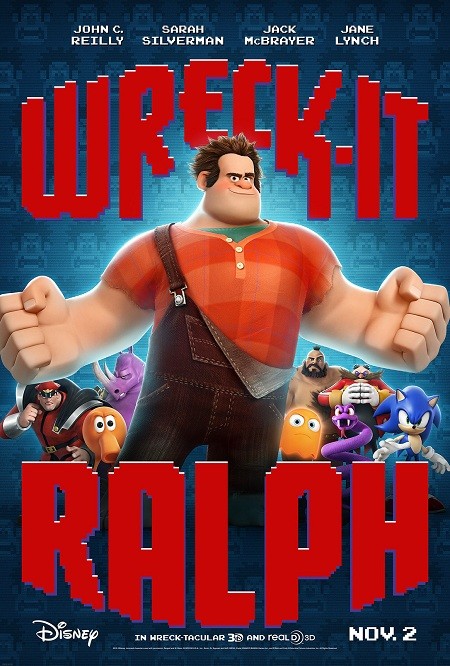 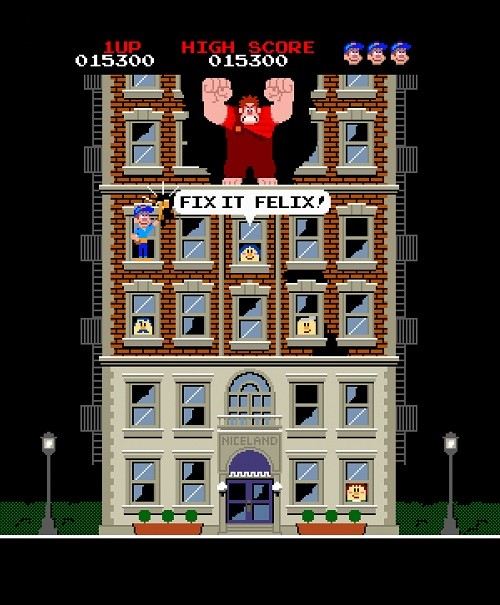 The fun starts when the arcade closes down. Characters from video games can travel from game to game through the game central station, which is actually just a surge protector. Wreck-It Ralph is fed up with being the bad guy. While the other characters of his game hang out at the penthouse. He’s secluded in the town dump. Everyone just thinks of him as the bad guy, and he just wants to be accepted just like everyone else.

So, Ralph sets out to get a hero’s medal to prove to the other characters in his game that he can be more than just a bad guy. He travels to the game, Hero’s Duty, with is like a “Call of Duty” type first person shooter. He doesn’t do so well there but is able to find a medal. Unfortunately, the medal ends up in a game called “Sugar Rush”, which is just like a Mario Kart game. He spends most his time in Sugar Rush trying to get his medal back, but meeting Vanellope Von Schweetz along the way. In a mix up Ralph must help Vanellope win a race in Sugar Rush in order to get his medal back. At the same time, he must return to his game soon, before the Arcade gets rid of his game. You see, without Ralph in the Fix-It Felix Jr game, it’s acting funny and has been put “Out of Order”.

I was very excited to see this movie. And I’m so please to say that this didn’t disappoint. There are so many video game references in here, I couldn’t wipe the smile off my face while watching it. You have cameos from Frogger, Kano, Burgertime, Bowser, Ryu, Sonic, and 100s more. If you grew up in the 80s / 90s playing video games you’re going to love this movie. I took my 6 year old nephew to this, and he loved as well. He may of not gotten all the references like I did, but he did enjoy it. This could very well be my favorite Disney animated movie of all time. Loved it!

Usually I don’t learn post on blogs, but I would like to say that this write-up very forced me to take a look at and do so! Your writing style has been surprised me. Thanks, quite nice post.