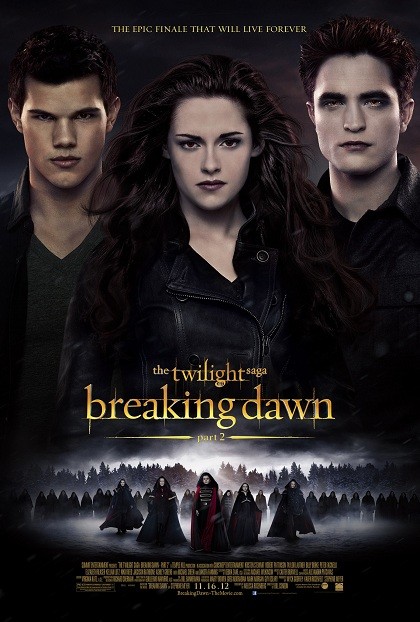 The Twilight Saga: Breaking Dawn – Part 2 is the fifth and final film of the Stephenie Meyer’s best-selling book series. The epic love story continues between Bella Swan (Kristin Stewart) and Edward Cullen (Robert Patterson). The movie starts out with Bella waking up as a newborn vampire with blood-red eyes, incredible strength, and an intense thirst for human blood that she must learn how to control. Edward takes Bella out into the woods to help teach her how to control her thirst for blood and to experience her new powers, senses, and strengths as a newborn vampire. Bella then gets to meet her daughter, Renesmee, the half-human/half-vampire child her and Edward conceived for the first time. Bella soon discovers that werewolf Jacob Black (Taylor Lautner) has imprinted upon her infant daughter. Bella is outraged and concerned that Jacob would imprint on an infant, but soon sorts out her feelings and realizes what a blessing it is to have him protecting her daughter, when she realizes that the Italy-based Volturi, an ancient vampire cult that enforces all of the vampire laws, is coming after her and her family. The Volturi believe that the Cullen clan has broken an ancient law by allowing an immortal child to live amongst them. The Volturi do not know that Renesmee is not an immortal child, but instead half-human/half-vampire. Thus, the Cullens try to gather as many of their vampire friends together as possible to be witnesses and attest to the Volturi that Renesmee is not an immortal child and is not dangerous or a threat. They are hoping they can talk and reason with the Volturi, but they brace themselves and plan for a possible impending battle with the Volturi. 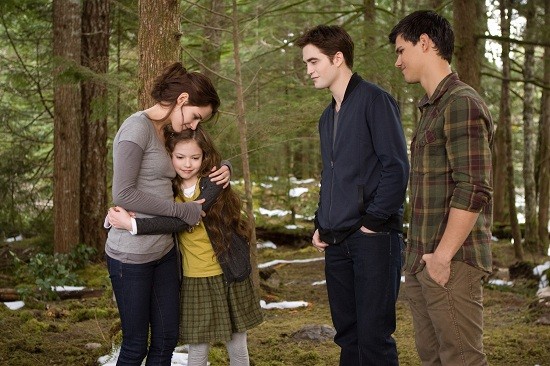 This movie was amazing. From the perspective of someone who has read the books and from someone who hasn’t read the books, we both loved it. There was a quality throughout the movie of familial, territorial, love-defending emotion that makes you want to tear up and has your heart squeezing painfully in your chest. The character of Bella was beautiful, Edward was romantic, and Jacob was muscle bound and protectively cute. The character of Charlie, Bella’s father, was hilarious and provided several laughs throughout the theater. There was a huge and pleasant surprise in the movie that we were not expecting. This twist in the plot practically made the whole theater gasp as the unexpected surprise was revealed. You will definitely be talking about this part of the movie after the movie is over regardless of if you’ve read the books or not; however, for those of you who did read the last book of the series, you may have been left wanting, but after watching this movie, you will understand and be very satisfied with how the movie tells the story of the book. If we were to critique one thing, it would be the computer graphics used for Renesmee. This was easily overlooked and almost comical. They could have done a much better part on the graphics in our opinion; however, it was an extremely beautiful moment when Renesmee’s tiny hand cupped Bella’s face for the first time. If you are a fan of the Twilight Saga movies or of the books, then we think you will thoroughly enjoy this film. We also think this was the best movie of the series hands down. We would give this movie 4 strips of bacon. Ladies, make sure to bring a box of Kleenex to the theater with you, because you are going to need them. The end of this movie will have you in tears.

[…] After the birth of Renesmee, the Cullens gather other vampire clans in order to protect the child from a false allegation that puts the family in front of the Volturi. Film Bacon’s Review […]

You’ve really captured all the essnetials in this subject area, haven’t you?

Hey Grady, I was having some design issues. Yesterday was my day of living like the Jack Bauer of the blogosphere fixing that mess. But it looks the comments are more readable now and the design tweaks worked out ok.Â  Reply

Steve,A simpler question to answer, as I think it is clear that Mark and Bill have laid it out in the affirmative, is, “Does obedience to the commands of Christ and the Scriptures further our sanctification?” You seem to state that we only obey more, passively, as Christ sanctifies us internally, thus sanctification is passive. Is that an accurate understanding of your statements?

I enjoyed this but kept getting told to look faster, however, I am on a small laptop and the screen size only allowed me to see a small portion of the images. Perhaps some consideration for the fact that I was then basing my decision on only the upper half of the work should be made. I didn’t have time to scroll and see the bottom half and I didn’t know before I started what screen size I might need. Thanks for the experiment.