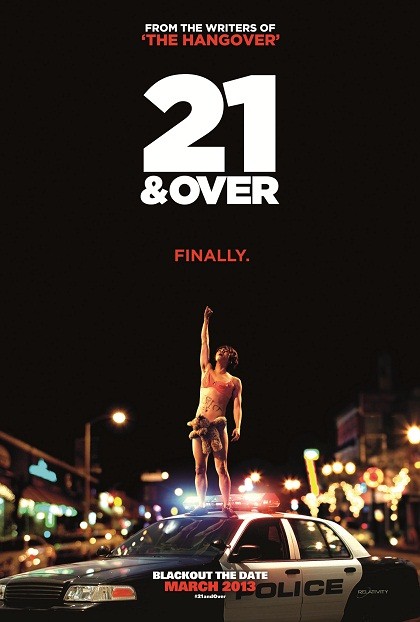 Straight-A college student Jeff Chang has always done what’s expected of him. But when his two best friends Casey and Miller surprise him with a visit for his 21st birthday, he decides to do the unexpected for a change, even though his critical medical school interview is early the next morning. What was supposed to be one beer becomes one night of chaos, over indulgence and utter debauchery in this outrageous comedy.
In theaters: March 1st, 2013

Warner Bros. Pictures and Legendary Pictures are teaming up with director Brian Helgeland for “42,” the powerful story of Jackie Robinson, the legendary baseball player who broke Major League Baseball’s color barrier when he joined the roster of the Brooklyn Dodgers. “42” will star Academy Award(R) nominee Harrison Ford (“Witness”) as the innovative Dodger’s general manager Branch Rickey, the MLB executive who first signed Robinson to the minors and then helped to bring him up to the show, and Chadwick Boseman (“The Express”) as Robinson, the heroic African American who was the first man to break the color line in the big leagues.
In theaters: April 12th, 2013

When a clumsy deadbeat accidentally kills his landlord, he must do everything in his power to hide the body, only to find that the distractions of lust, the death of his beloved brother, and a crew of misfit characters force him on a journey where a fortune awaits him.
In theaters: February 8th, 2013

Continuing where the first film left off, Nell Sweetzer (Ashley Bell) is found terrified and alone in rural Louisiana. Back in the relative safety of New Orleans, Nell realizes that she can’t remember entire portions of the previous months—only that she is the last surviving member of her family. Just as Nell begins the difficult process of starting a new life, the evil force that once possessed her is back with other, unimaginably horrific plans that mean her last exorcism was just the beginning.
In theaters: March 1st, 2013

Spring Breakers” tells the story of four sexy college girls as they plan to fund their spring break getaway by burglarizing a fast food shack. But that’s only the beginning… At a motel room rager, fun reaches its legal limit and the girls are arrested and taken to jail. Hungover and clad only in bikinis, the girls appear before a judge but are bailed out unexpectedly by Alien (James Franco), an infamous local thug who takes them under his wing and leads them on the wildest Spring Break trip in history. Rough on the outside but with a soft spot inside, Alien wins over the hearts of the young Spring Breakers, and leads them on a Spring Break they never could have imagined.
In theaters: March 29th, 2013