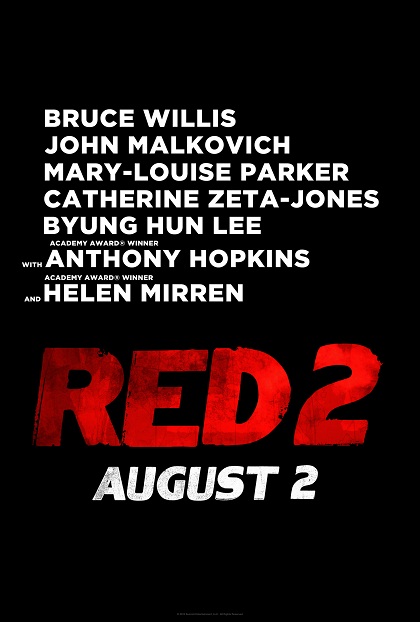 In RED 2, the high-octane action-comedy sequel to the worldwide sleeper hit, retired black-ops CIA agent Frank Moses reunites his unlikely team of elite operatives for a global quest to track down a missing portable nuclear device. To succeed, they’ll need to survive an army of relentless assassins, ruthless terrorists and power-crazed government officials, all eager to get their hands on the next-generation weapon. The mission takes Frank and his motley crew to Paris, London and Moscow. Outgunned and outmanned, they have only their cunning wits, their old-school skills, and each other to rely on as they try to save the world—and stay alive in the process.
In theaters: August 2nd, 2013

When veteran 911 operator, Jordan (Halle Berry), takes a life-altering call from a teenage girl (Abigail Breslin) who has just been abducted, she realizes that she must confront a killer from her past in order to save the girl’s life.
In theaters: March 15th, 2013

When the White House (Secret Service Code: “Olympus”) is captured by a terrorist mastermind and the President is kidnapped, disgraced former Presidential guard Mike Banning finds himself trapped within the building. As our national security team scrambles to respond, they are forced to rely on Banning’s inside knowledge to help retake the White House, save the President, and avert an even bigger disaster.
In theaters: March 22nd, 2013

The almost entirely true story of Abraham Lincoln and his self-appointed bodyguard, U.S. Marshal Ward Hill Lamon—a banjo-playing Southerner who foiled repeated attempts on the President’s life, and kept him functioning during the darkest hours of the Civil War.