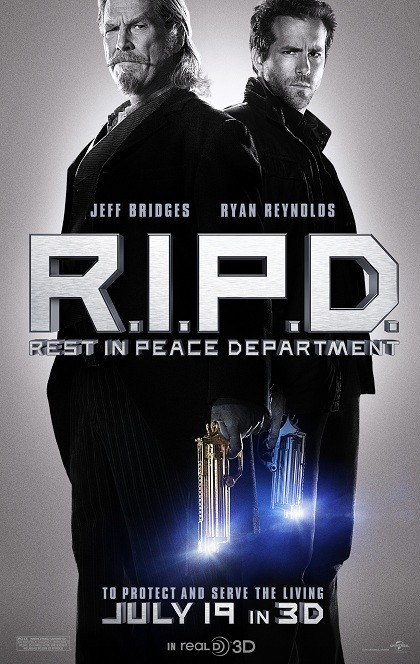 Jeff Bridges and Ryan Reynolds headline the 3D supernatural action-adventure R.I.P.D. as two cops dispatched by the otherworldly Rest In Peace Department to protect and serve the living from an increasingly destructive array of souls who refuse to move peacefully to the other side. R.I.P.D. is directed by Robert Schwentke (Red) and produced by Neal H. Moritz (Fast & Furious series, I Am Legend), Mike Richardson (Hellboy, Hellboy II: The Golden Army) and Michael Fottrell (Fast & Furious series, Live Free or Die Hard).
In theaters: July 19th

The Ghastly Love of Johnny X

Banished to Earth for intergalactic juvenile delinquency, Johnny X and his gang of Ghastly Ones set off in search of a piece of alien technology that could change the fate of the universe forever—the so-called “resurrection suit.” Soon, the extraterrestrial nogoodniks are embroiled in a wacky scheme involving a femme fatale named Bliss, a shifty concert promoter with schemes of his own, and a recently deceased musician who won’t let a little decomposition stop him from rocking.
In Theaters: April 26th, 2013

Marvels “Thor: The Dark World” continues the big-screen adventures of Thor, the Mighty Avenger, as he battles to save Earth and all the Nine Realms from a shadowy enemy that predates the universe itself. In the aftermath of Marvels “Thor” and “Marvels The Avengers,” Thor fights to restore order across the cosmos…but an ancient race led by the vengeful Malekith returns to plunge the universe back into darkness. Faced with an enemy that even Odin and Asgard cannot withstand, Thor must embark on his most perilous and personal journey yet, one that will reunite him with Jane Foster and force him to sacrifice everything to save us all.
In theaters: November 8th

The all-star comedy cast from Grown Ups returns (with some exciting new additions) for more summertime laughs. Lenny (Adam Sandler) has relocated his family back to the small town where he and his friends grew up. This time around, the grown ups are the ones learning lessons from their kids on a day notoriously full of surprises: the last day of school.
In theaters: July 12th