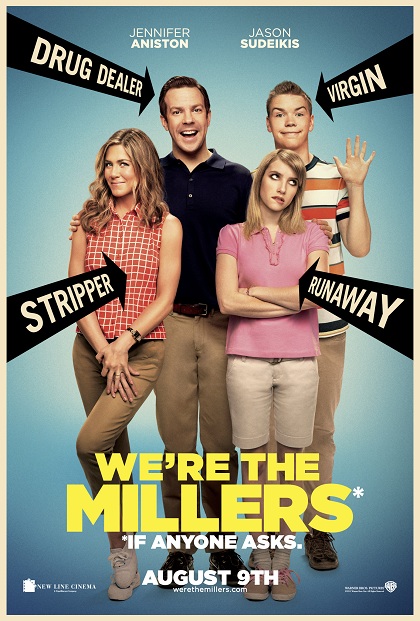 A veteran pot dealer creates a fake family as part of his plan to move a huge shipment of weed into the U.S. from Mexico.
In theaters: August 3rd, 2013

Jon Martello (Joseph Gordon-Levitt) is a strong, handsome, good old-fashioned guy. His buddies call him Don Jon due to his ability to “pull” a different woman every weekend, but even the finest fling doesn’t compare to the bliss he finds alone in front of the computer watching pornography. Barbara Sugarman (Scarlett Johansson) is a bright, beautiful, good old-fashioned girl. Raised on romantic Hollywood movies, she’s determined to find her Prince Charming and ride off into the sunset. Wrestling with good old-fashioned expectations of the opposite sex, Jon and Barbara struggle against a media culture full of false fantasies to try and find true intimacy in this unexpected comedy written and directed by Joseph Gordon-Levitt.
In theaters: October 18th, 2013

From above the world of Cars comes Disney’s Planes, an action-packed 3D animated comedy adventure featuring Dusty (voice of Dane Cook), a plane with dreams of competing as a high-flying air racer. But Dusty’s not exactly built for racing, and he happens to be afraid of heights. So he turns to a seasoned naval aviator, who helps Dusty qualify to take on the defending champ of the race circuit. Dusty’s courage is put to the ultimate test as he aims to reach heights he never dreamed possible, giving a spellbound world the inspiration to soar.
In theaters: August 9th, 2013

How to Make Money Selling Drugs

A shockingly candid examination of how a street dealer can rise to cartel lord with relative ease, How to Make Money Selling Drugs is an insider’s guide to the violent but extremely lucrative drug industry. Told from the perspective of former drug dealers, and featuring interviews with rights advocates Russell Simmons, Susan Sarandon, and David Simon (creator of The Wire), the film gives you the lessons you need to start your own drug empire while exposing the corruption behind the “war on drugs.”
In theaters: June 26th, 2013