Here’s an article from AP… 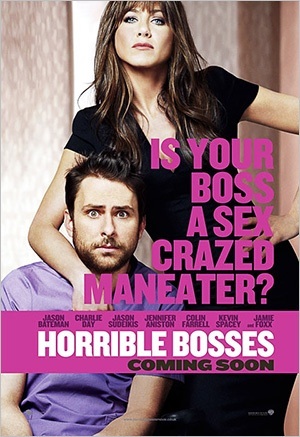 Charlie Day can’t say no to a good scheme.

On “It’s Always Sunny in Philadelphia,” the FX series Day stars in, writes and produces with Rob McElhenney and Glenn Howerton, his character’s exploits have included trying to sell barrels of gas to capitalize on high prices at the pump, saving up for retirement with Garbage Pail Kids cards, and attempting to resolve a real estate squabble with a flaming bag of poop.

In the new comedy film “Horrible Bosses,” opening Friday, Day stars alongside Jason Bateman and Jason Sudeikis as a trio of friends who plot to murder their variously oppressive managers.

While Day’s characters seldom lack enthusiasm for their exploits, their rate of success is — thankfully — close to nil.

“Schemes are funny because character’s motivations are very clear,” Day said in a recent interview. “You really have to understand why a person is motivated to do a terrible thing. You’re watching a character try and do something that they really should not be doing, and enjoying watching them fail at it. Because if they got away with it, it’s ‘Hannibal’ or something.”

In the six seasons of “Sunny,” Day has been a fan favorite for his lovably deranged behavior. His character, also named Charlie, is illiterate, addicted to sniffing glue and extremely fond of cats.

Day’s performance on the cult hit — about three self-obsessed friends running a Philadelphia bar — eventually caught the attention of Hollywood. Last year, he was generally considered the best part of the romantic comedy “Going the Distance.” His unabashed character gleefully spouted sex talk on the street and instituted an “open door” bathroom policy at home. 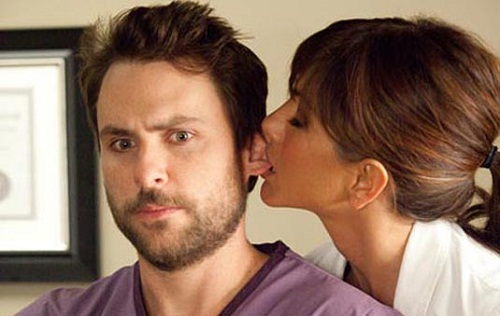 “Horrible Bosses” is Day’s biggest movie part yet. For many of his scenes, he’s paired with Jennifer Aniston, who plays his boss, a sexually abusive dentist.

At the sprawling press junket for “Horrible Bosses” at New York’s Waldorf Astoria, Day appeared as though he had been loaned out to the land of glitzy moviemaking from the merrily depraved world of “It’s Always Sunny.” He has an exceptionally easy manner, and a warm glint in his eye for every fan of “Sunny” that approaches him.

What’s remarkable is how seamlessly Day has transitioned from the fringe to the mainstream.

“People are like, ‘Charlie’s becoming a movie star!’ I’m like, ‘It’s about time,'” says McElhenney. “I feel like this should have happened years ago. Charlie’s just the kind of guy that you can write any scene, any line of dialogue, and you know he’s going to find a way to make it funny.”

McElhenney first met Day years ago on a cross-country flight while they were both struggling actors auditioning for the same part in a sitcom pilot. When McElhenney created “Sunny” — it began as a cheaply made home movie — he just turned to his friends, including Day. In a rye bit of casting, Day’s wife, actress Mary Elizabeth Ellis, plays Charlie’s unrequited love interest, known only as “The Waitress.”

“It was definitely actor first and foremost,” Day, a Rhode Island native, says of his aspirations before “Sunny.” ”I never saw myself as a comedian. I saw myself as a guy who can act funny. Still when I go on talk shows or whatever, I worry that I have to live up to some kind of comedic persona.”

Day says he, Howerton and McElhenney began simply by playing the worst sides of themselves, and improvised characteristics (like Charlie’s inability to read) as they went along. It’s ironic that he plays someone so uneducated, because Day is a graduate of Merrimack College, studied acting with Massachusetts’ Williamstown Theater Festival, and his parents — a professor and a music teacher — both have Ph.D.s in musicology.

“Perhaps a lot of that comes out of my own fear and insecurities of my own intelligence,” says Day. “Being in such a well-educated family, perhaps I was always nervous about that. So it was good to make light of that in the show.” He waits a beat, and then adds: “I can read.”

Day bears some of his parents’ musical talent, which he’s occasionally exploited by writing songs on “Sunny,” such as the beloved “Nightman,” a nonsensical tune that sparked an actual touring theater show in 2009 called “The Nightman Cometh.”

As “Sunny” has grown and continued (it recently wrapped its seventh season, to premiere this fall) the fortunes of its three principals have grown, but none more so than Day. Director Guillermo Del Toro has recently expressed interest in casting him in his film “Pacific Rim.”

But going from the intimate set of “Sunny” to large studio productions has been an adjustment.

“It’s a real challenge,” says Day. “Rob, Glenn and myself are probably three of the most opinionated men you’ll ever meet on the set. We’re not phoning it in when it comes to that show. Whether it’s a script or a prop or whatever it is, we have opinions and we really believe in affecting the production as a whole. So it’s very difficult to then hand all that over to other people.”

He adds: “Once I really let go, it was relaxing.”

Sudeikis also co-starred with Day in “Going the Distance” and made a guest appearance on last season’s “Sunny.” He’s gotten to see up close Day’s propensity to get riled up in high-pitched, rapid-fire fury. Sudeikis calls his humor “hilarious hostility.”

“He’s already got a funny take on the world and when you give him an emotion to ride out, he cracks me up,” says Sudeikis. “He’s very genuine as a person and therefore as an actor.”

That earnestness is one reason why audiences tend to root for Day, however despicable his schemes.

“I don’t think the characters in ‘Sunny’ would ever go as far as to actually attempt to have someone murdered, even though they might seem more extreme,” says Day. “They’d come up with something more clever.”