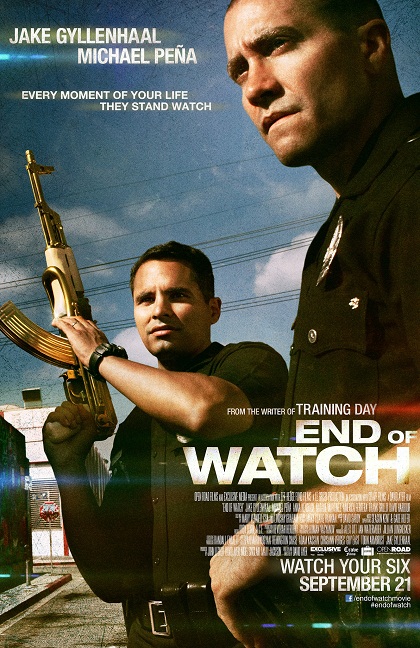 End of Watch
A powerful story of family, friendship, love, honor and courage, End Of Watch stars Academy Award(R) nominee Jake Gyllenhaal and Michael Pena as young Los Angeles police officers Taylor and Zavala as they patrol the city’s meanest streets of south central Los Angeles. Giving the story a gripping, first-person immediacy, the action unfolds through footage from the handheld HD cameras of the police officers, gang members, surveillance cameras, and citizens caught in the line of fire to create a riveting portrait of the city’s most dangerous corners, the cops who risk their lives there every day, and the price they and their families are forced to pay.
In theaters: September 21st, 2012

Bullet to the Head

After watching their respective partners die, a cop and a hitman form an alliance in order to bring down their common enemy.
In Theaters: February 1, 2013

Beca (Anna Kendrick) is that girl who’d rather listen to what’s coming out of her headphones than what’s coming out of you. Arriving at her new college, she finds herself not right for any clique but somehow is muscled into one that she never would have picked on her own: alongside mean girls, sweet girls and weird girls whose only thing in common is how good they sound when they sing together, in the new out-loud comedy Pitch Perfect. Loaded with new takes on old favorites to hits of right now that are seamlessly mixed together, mashed up and arranged like you’ve never heard before, Pitch Perfect is directed by Jason Moore, who opened our eyes to the very misbehaved life of puppets in the surprise Broadway sensation Avenue Q.
In theaters: October 5th, 2012

In Istanbul, retired CIA operative Bryan Mills and his wife are taken hostage by the father of a kidnapper Mills killed while rescuing his daughter.
In theaters: October 5th, 2012