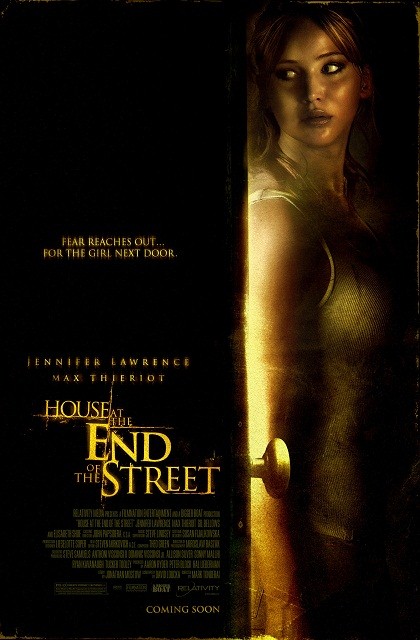 House at the End of the Street is a new thriller starring Elisabeth Shue and Jennifer Lawrence. They are a Mother (Sarah) and Daughter (Elissa) who recently move into a new house. Normally, they wouldn’t be able to afford a house of this size. But, the price was low since there was murders that took place years ago at a house down the street. As the story goes, there was a family that lived there, and the daughter was mentally unstable. She ended up killing her parents. No one knows what happened to the girl.

They find out from some neighbors that the son, Ryan, of the murdered parents lives at that house alone. Of course, this “mysterious boy” attracts Elissa. He offers her a ride home from a party one night and she thinks he’s not such bad guy. Her mother on the other hand, forbids her from hanging out with him alone. She thinks her mom is over-reacting until she finds out Ryan has his sister locked up in his basement.

This movie is 91 minutes long and about 90 minutes too long. You would think with some decent actors attached to this project it would be pretty good. Well, the story goes nowhere. The first hour is painfully boring. And this movie is being billed as a scary movie, but it’s not. There’s nothing scary at all. Most horror movies will have some cheesiness, but still have some sort of story or jump scares. This has nothing. I just can’t recommend this movie at all, unless you are in need of a cure for insomnia.