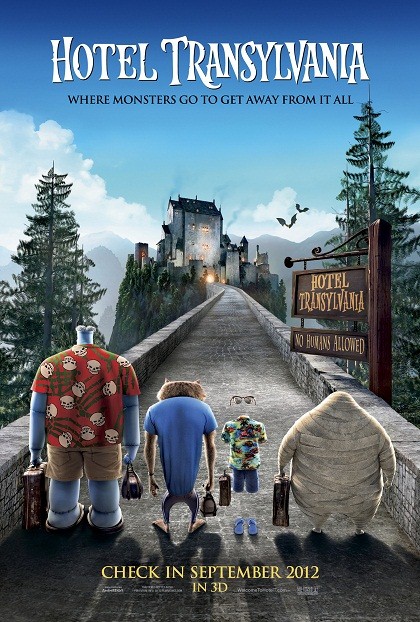 Welcome to the Hotel Transylvania, Dracula’s (Adam Sandler) lavish five-stake resort, where monsters and their families can live it up, free to be the monsters they are without humans to bother them. On one special weekend, Dracula has invited some of the world’s most famous monsters–Frankenstein and his bride, the Mummy, the Invisible Man, a family of werewolves, and more–to celebrate his daughter Mavis’s 118th birthday. For Drac, catering to all of these legendary monsters is no problem–but his world could come crashing down when one ordinary guy stumbles on the hotel and takes a shine to Mavis.
In theaters: September 28th, 2012

Set in the near future, Frank, a retired cat burglar, has two grown kids who are concerned he can no longer live alone. They are tempted to place him in a nursing home until Frank’s son chooses a different option: against the old man’s wishes, he buys Frank a walking, talking humanoid robot programmed to improve his physical and mental health. What follows is an often hilarious and somewhat heartbreaking story about finding friends and family in the most unexpected places.
In theaters: August 24th, 2012

SINISTER is a frightening new thriller from the producer of the PARANORMAL ACTIVITY films and the writer-director of THE EXORCISM OF EMILY ROSE. Ethan Hawke plays a true crime novelist who discovers a box of mysterious, disturbing home movies that plunge his family into a nightmarish experience of supernatural horror.
In theaters: October 5th, 2012

Hit and Run (warning, this is the red band trailer)

From the producer of Wedding Crashers–written and directed by and starring comic talent Dax Shepard (NBC’s “Parenthood”) HIT AND RUN is the story of Charlie Bronson (Shepard), a nice guy with a questionable past who risks everything when he busts out of the witness protection program to deliver his fiance (Kristen Bell) to Los Angeles to seize a once-in-a-lifetime opportunity. Their road trip grows awkwardly complicated, when they are chased by the feds (led by Tom Arnold)… and increasingly dangerous, when Charlie’s former pals, a band of gangsters (led by Bradley Cooper), enter the fray.
In theaters: August 24th, 2012