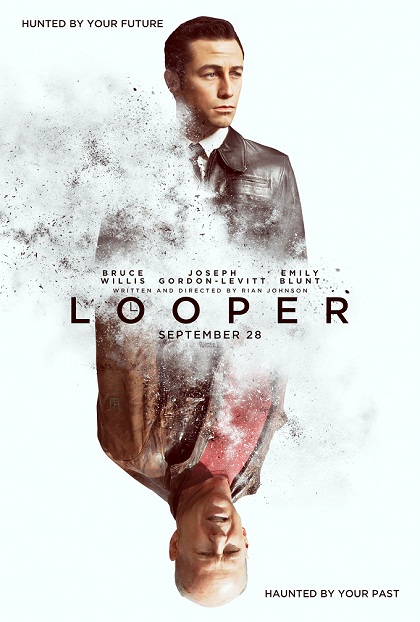 In the futuristic action thriller Looper, time travel will be invented – but it will be illegal and only available on the black market. When the mob wants to get rid of someone, they will send their target 30 years into the past, where a “looper” – a hired gun, like Joe (Joseph Gordon-Levitt) – is waiting to mop up. Joe is getting rich and life is good… until the day the mob decides to “close the loop,” sending back Joe’s future self (Bruce Willis) for assassination. The film is written and directed by Rian Johnson and also stars Emily Blunt, Paul Dano, and Jeff Daniels. Ram Bergman and James D. Stern produce.
In theaters: September 28th, 2012

The Umbrella Corporations deadly T-virus continues to ravage the Earth, transforming the global population into legions of the flesh eating Undead. The human races last and only hope, ALICE (Milla Jovovich), awakens in the heart of Umbrella’s most clandestine operations facility and unveils more of her mysterious past as she delves further into the complex. Without a safe haven, Alice continues to hunt those responsible for the outbreak; a chase that takes her from Tokyo to New York, Washington, D.C. and Moscow, culminating in a mind-blowing revelation that will force her to rethink everything that she once thought to be true. Aided by newfound allies and familiar friends, Alice must fight to survive long enough to escape a hostile world on the brink of oblivion. The countdown has begun.
In theaters: September 14th, 2012

The future America is an irradiated waste land. On its East Coast, running from Boston to Washington DC, lies Mega City One–a vast, violent metropolis where criminals rule the chaotic streets. The only force of order lies with the urban cops called “Judges” who possess the combined powers of judge, jury and instant executioner. Known and feared throughout the city, Dredd (Karl Urban) is the ultimate Judge, challenged with ridding the city of its latest scourge–a dangerous drug epidemic that has users of “Slo-Mo” experiencing reality at a fraction of its normal speed.
In theaters: September 21st, 2012

When a group of petty criminals is hired by a mysterious party to retrieve a rare piece of found footage from a rundown house in the middle of nowhere, they soon realize that the job isn’t going to be as easy as they thought. In the living room, a lifeless body holds court before a hub of old television sets, surrounded by stacks upon stacks of VHS tapes. As they search for the right one, they are treated to a seemingly endless number of horrifying videos, each stranger than the last.
In theaters: October 5th, 2012

In the comedy Here Comes the Boom, former collegiate wrestler Scott Voss (Kevin James) is a 42-year-old apathetic biology teacher in a failing high school. When cutbacks threaten to cancel the music program and lay off its teacher (Henry Winkler,) Scott begins to raise money by moonlighting as a mixed martial arts fighter. Everyone thinks Scott is crazy–most of all the school nurse, Bella (Salma Hayek)–but in his quest, Scott gains something he never expected as he becomes a sensation that rallies the entire school
In theaters: October 12th, 2012