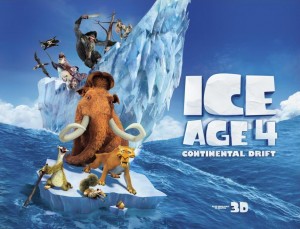 Ice Age: Continental Drift is the fourth movie in the Ice Age set.  Similar to the other Ice Age movies, it follows the travels of Manny , Ellie , their daughter Peaches , Sid  , Diego and of course Scrat.

The movie starts with Scrat doing what else, chasing after a acorn, a common theme through the movie.  The movie quickly changes subject to Manny’s family as they travel across the continent.  Peaches is now a “pre-teen” and is testing out her boundy’s with her parents.  She thinks her mom and dad are being a bit over protective of her.

We also get to meet Sid’s grandmother.  Her attitude is what you would expect of a 90 year old grandma that has lived her life and “tells it like it is”.  Sid’s family drops off grandma in Sid’s lap, and quickly makes a run for it, they don’t want to take care of her anymore.

Peaches sneaks out to hangout with some of her friends after her dad tells her not to.  When her dad finds out he goes to confront her about it and embarasses her infront of some friends she is trying to impress.  This leads to a large arument between Peaches and her Dad.

Feelings are hurt because of the argument and before they can apologize, a big earthquake hits.  The shaking starts the ground breaking apart and seperates Sid, Grandma, Diego, and Manny from Ellie and Peaches. 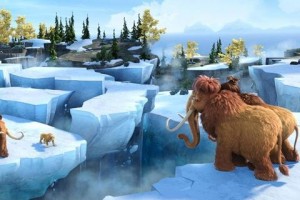 After being separated Manny and his friends run across a group of Pirates who want to take them as prisoners.

Overall we enjoyed this movie.  My 6 year old son, really enjoys the Ice Age movies, and this movie delivered the same hilarity and enjoyment of the others.  The plot is somewhat similar to the Disney/Pixar movie Brave, but that did not keep us from enjoying the movie.  As with all Ice Age movies, you will laugh, a lot, especially at Scrat.

Over all we give this 3.5 slices of bacon.