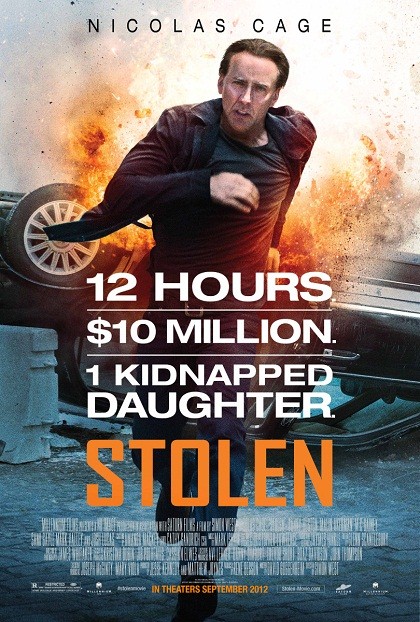 Director Simon West and Nicolas Cage re-team for the first time since CON AIR for STOLEN, a fast-paced action thriller set during Mardi Gras in New Orleans. Will Montgomery (Nicolas Cage) is a master thief who after being double-crossed in a heist gone awry is sent to prison for 8 years. Upon his release he’s ready to leave his criminal past behind and try to rebuild a relationship with his estranged daughter Allison. The FBI and his old cohorts believe that he hid the loot from the last heist 8 years ago, $10 million in bonds. To get his hands on it, his old partner Vincent kidnaps Allison and demands the entire $10 million as ransom. Will must trust his instincts and his old partner in crime, the beautiful, sexy and smart Riley, to do one more heist to get his daughter back alive before it’s too late.
In theaters: September 15th, 2012

A recent high-school grad feels pressured to become more sexually experienced before she goes to college.
In Theaters: 2013

Toys in the Attic

Set in a magical world of toys and knick-knacks stored in the attic of a home in Prague, this award-winning stop-motion animated feature has been called “An animation masterpiece” (Anima Basuari), and “a diabolically inventive tale that is four parts Toy Story and one part Tim Burton (New York International Children’s Film Festival). The setting for the film was inspired by the cultural and political contrast of the Cold War era and its impact on director Jiri Barta and the Czech Republic. The world of the attic is divided into the land of happy toys in the West and the Land of Evil in the East. The despotic Head of State rules over the Land of Evil with a band of sinister minions, insects and rotted vegetables. When the lovely Buttercup (Vivian Schilling) is kidnapped and held prisoner by The Head (Jiri Labus, with voice by Douglas Urbanski), it is up to her friends–a teddy bear (Forest Whitaker), a mechanical mouse (Joan Cusack) and marionette puppet (Cary Elwes)–to cross the international boundary and attempt their daring rescue.
In theaters: September 7th, 2012

When aspiring vet Cassie finds out that her Uncle Peter’s dog dancing studio is in danger of closing, she enters her devoted pup Pijo in the Dog Dancing Championships. Standing between the grand prize and the glory is ten-time champion Gertrude and her dancing canine Chaos, who will stop at nothing to win. With the help of family and friends, Cassie and Pijo lace up all six dancing shoes, raise the woof, and take on the competition tail-on.
In theaters: August 31st, 2012