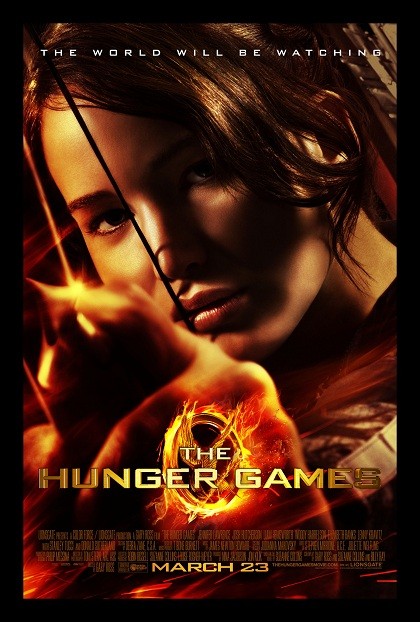 The Hunger Games is a based off a very popular young adult novel written by Suzanne Collins. The story takes place in a post-apocalyptic world. The country of North America is now the country of Panem. The Capitol is the major city of Panem, where the government is run and most of the wealthiest live. Surrounding the Capitol, the rest of the country is divided into 12 different districts.

The Hunger Games is an annual televised event. Kids names between the ages of 12 – 18 are drawn from a giant fishbowl. One girl and one boy is chosen from each district, making a total of 24 children. The kids are trained for a couple weeks before thrown into a virtual “forest-like” arena. It is in the “arena” where they have to kill each other to be the last one standing. 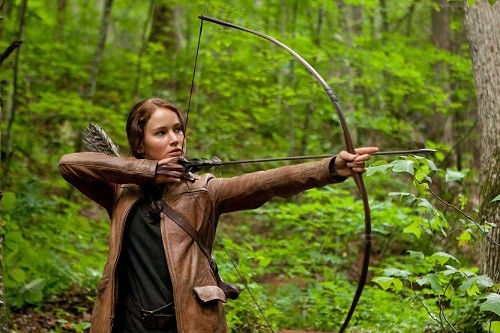 Katniss (Jennifer Lawrence) is the main character of the story. She is from District 12. Life there is very grim. There’s hardly any food for anyone, and everyone lives in dirty shacks. Katniss, being the expert archer, crosses the border to kill squirrels for food. On the day of the Reaping, Katniss’ 12 year old sister is chosen to be the District 12 tribute for hunger games. Katniss steps in and volunteers in her place. Her and an old friend of hers, Peeta (Josh Hutcherson) are to represent District 12. 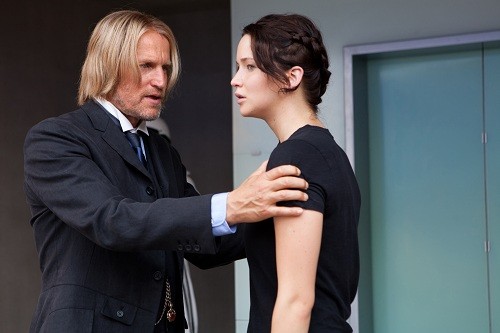 Katniss and Peeta are taken to the Capitol to train for the Hunger Games. They get advice from a former winner, Haymitch Abernathy (Woody Harrelson), on how to win.

The Hunger Games is just a hoot with the people of the Capitol, the place bets on the game, and don’t really have any sympathy for kids killing each other. It is done basically like a game show, all the “tributes” are interviewed beforehand. Then they are thrown into the arena. It is there where the Hunger games begin. Every inch of the arena seems to be ran by a team of programmers who throw “wrenches” in the way of the kids. Who will make it out alive? 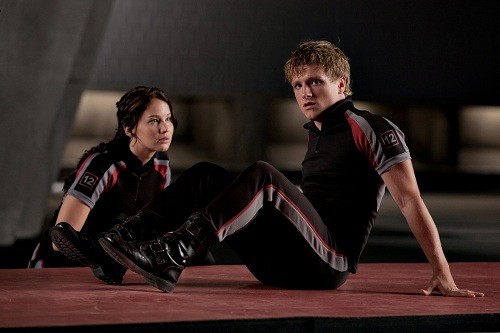 It is really hard to write a synopses for this movie without giving some spoilers away. I avoided it as best as I could. I never have read the Hunger Games books, so I went into this movie without any expectation at all. I walked out of this movie very pleased. I loved this movie! Jennifer Lawrence, who plays the part of Katniss is awesome. I don’t know if it holds up to the book, but I felt it’s probably one of the best movies I’ve seen in a long time. Totally Recommended – 4.5 out of 5.

5 replies on “The Hunger Games – Review”

[…] Set in a future where the Capitol selects a boy and girl from the twelve districts to fight to the death on live television, Katniss Everdeen volunteers to take her younger sister’s place for the latest match. Film Bacon’s Review […]

I can’t believe that this movie is finally coming to DVD this week. I have been impatiently waiting for quite some time now. The books just sucked me into Panem full force. I totally wanted to be Katniss when I was reading the books and I read all of the books in nine days! I didn’t get a chance to see it in theaters so I’ve been patiently waiting. I know that the movie won’t be as good as the book but that’s ok. I tried to reserve the movie at my local kiosk but it’s not even available. So a Dish co-worker suggested trying Blockbuster @ Home which delivers the movies straight to my door. Blockbuster even allowed me to reserve a copy! How awesome is that? It cuts the unneeded trips to the kiosk and saves me some gas too. There’s a pretty big bonus attached to this movie and his name is Liam Hemsworth. I’m definitely looking forward to it. I also can’t wait for Catching Fire to come out next year but this time I’ll make it to the theater. I really wish there were more books to read. Suzanne Collins is a genius!

Finidng this post. It’s just a big piece of luck for me.

“….though it wouldnâ€™t surprise me if some local Democratic party officials have nice new swimming pools and cars.”Until they can prove otherwise, i also think that’s probably what happened. It’s unbelievable how the taxpayer is treated with such contempt.

[…] really enjoyed the first Hunger Games. I never read the books, but, that keeps me more on the edge of my seat, I don’t know what to […]