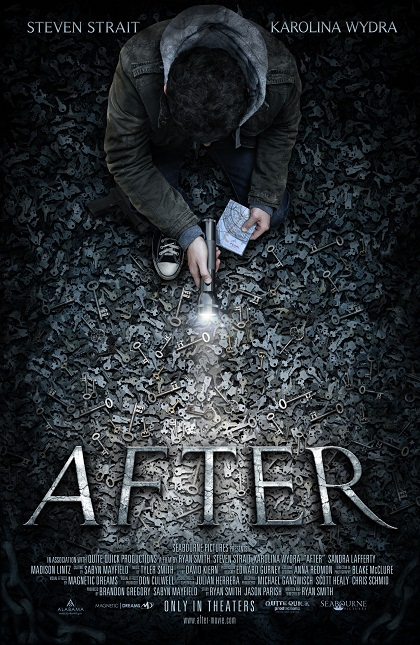 When two bus crash survivors awake to discover that they are the only people left in their small town, they must form an unlikely alliance in a race to unravel the truth behind their isolation. As strange events begin to unfold, they start to question whether the town they know so well is really what it seems.
In theaters: September 14th, 2012

FUN SIZE is a teen comedy centered on a sarcastic high school senior, Wren (Victoria Justice), who is eager to distance herself from her dysfunctional family by going off to college. Before that can happen, Wren’s mother, Joy, insists that she watch her little brother Albert on Halloween night, so Joy can go to a rager with her much younger boyfriend. When Wren gets distracted by an invitation to the party of the year, Albert disappears into a sea of trick-or-treaters. Frantic to locate him before their mother discovers he’s missing, Wren enlists the help of her sassy best friend April, as well as Peng, an aspiring ladies man and co-captain of the debate team, and Peng’s best friend, Roosevelt, a sweet nerd whose crush on Wren clouds his better judgment. This unlikely foursome embarks on a high-stakes, all-night adventure to find Albert, crossing paths with outrageous characters every step of the way.
In theaters: October 26th, 2012 Fun Size Not yet rated

Oz: The Great and Powerful

Disney’s fantastical adventure “Oz The Great and Powerful,” directed by Sam Raimi, imagines the origins of L. Frank Baum’s beloved character, the Wizard of Oz. When Oscar Diggs (James Franco), a small-time circus magician with dubious ethics, is hurled away from dusty Kansas to the vibrant Land of Oz, he thinks he’s hit the jackpot–fame and fortune are his for the taking–that is until he meets three witches, Theodora (Mila Kunis), Evanora (Rachel Weisz) and Glinda (Michelle Williams), who are not convinced he is the great wizard everyone’s been expecting. Reluctantly drawn into the epic problems facing the Land of Oz and its inhabitants, Oscar must find out who is good and who is evil before it is too late. Putting his magical arts to use through illusion, ingenuity–and even a bit of wizardry–Oscar transforms himself not only into the great and powerful Wizard of Oz but into a better man as well.
In theaters: March 8th, 2013