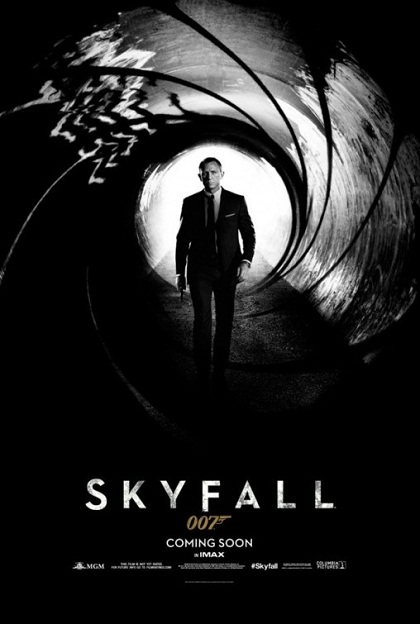 Daniel Craig is back as Ian Fleming’s James Bond 007 in Skyfall, the 23rd adventure in the longest-running film franchise of all time. In Skyfall, Bond’s loyalty to M is tested as her past comes back to haunt her. As MI6 comes under attack, 007 must track down and destroy the threat, no matter how personal the cost.
In theaters: November 9th, 2012

Walt Disney Animation Studios and Emmy(R)-winning director Rich Moore (TV’s “The Simpsons,” “Futurama”) take moviegoers on a hilarious, arcade-game-hopping journey in “Wreck-It Ralph.” Ralph (voice of John C. Reilly, “Talladega Nights: The Ballad of Ricky Bobby,” “Step Brothers”) is tired of being overshadowed by Fix-It Felix (voice of Jack McBrayer, “30 Rock”), the “good guy” star of their game who always gets to save the day. But after decades doing the same thing andseeing all the glory go to Felix, Ralph decides he’s tired of playing the role of a bad guy. He takes matters into his own massive hands and sets off on a game-hopping journey across the arcade through every generation of video games to prove he’s got what it takes to be a hero. On his quest, he meets the tough-as-nails Sergeant Calhoun (voice of Jane Lynch, TV’s “Glee”) from the first-person action game Hero’s Duty. But it’s the feisty misfit Vanellope von Schweetz (voice of Sarah Silverman, “The Sarah Silverman Program”) from the candy-coated cart racing game, Sugar Rush, whose world is threatened when Ralph accidentally unleashes a deadly enemy that threatens the entire arcade. Will Ralph realize his dream and save the day before it’s too late?
In theaters: November 2nd, 2012

From director Joe Dante comes a 3D thriller that explores the fears and secrets buried deep within the human mind. After moving into a new neighborhood, brothers Dane and Lucas, along with their neighbor Julie, discover a bottomless hole in the basement of their home. They find that once the hole is exposed, evil is unleashed. With strange shadows lurking around every corner and nightmares coming to life, they are forced to come face to face with their darkest fears to put an end to the mystery of THE HOLE.
In theaters: September 28th, 2012

John (Adkins, The Expendables 2) wakes up from a coma to discover his wife and daughter were slaughtered in a brutal home invasion. Haunted by images of the attack, he vows to kill the man responsible, Luc Deveraux (Van Damme). While John tries to piece his reality back together, things get more complicated when he is pursued by a relentless UniSol (Arlovski). As John gets closer to Deveraux and the rouge army of genetically enhanced warriors led by back-from-the-dead leader Andrew Scott (Lundgren), John discovers more about himself and begins to call into question everything he believed to be true.
In theaters: November 30th, 2012