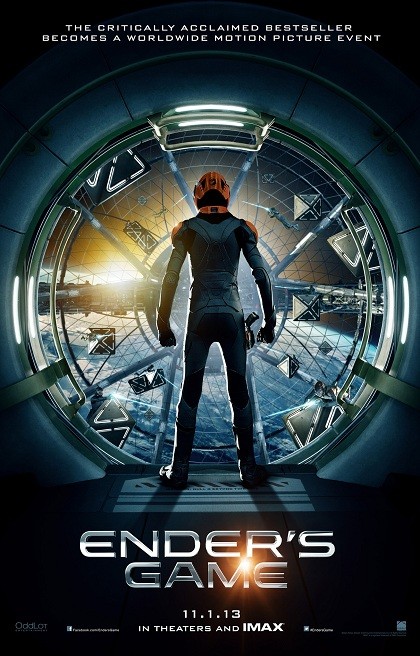 70 years after a horrific alien war, an unusually gifted child is sent to an advanced military school in space to prepare for a future invasion.
In theaters: November 1st, 2013

In The World’s End, 20 years after attempting an epic pub crawl, five childhood friends reunite when one of them becomes hellbent on trying the drinking marathon again. They are convinced to stage an encore by mate Gary King (Simon Pegg), a 40-year-old man trapped at the cigarette end of his teens, who drags his reluctant pals to their hometown and once again attempts to reach the fabled pub – The World’s End. As they attempt to reconcile the past and present, they realise the real struggle is for the future, not just theirs but humankind’s. Reaching The World’s End is the least of their worries.
In theaters: August 23rd, 2013

THE HUNGER GAMES: CATCHING FIRE begins as Katniss Everdeen has returned home safe after winning the 74th Annual Hunger Games along with fellow tribute Peeta Mellark. Winning means that they must turn around and leave their family and close friends, embarking on a “Victor’s Tour” of the districts. Along the way Katniss senses that a rebellion is simmering, but the Capitol is still very much in control as President Snow prepares the 75th Annual Hunger Games (The Quarter Quell)—a competition that could change Panem forever.
In theaters: November 22nd, 2013

The new mayor wants to automate the police force, including Officer Dibble’s job, whose job it is to keep an eye on Top Cat and his Gang. Top Cat quickly realizes that a capable new police force will spoil his chances of continuing to get away with his shenanigans, so he decides to foil the mayor’s plans and save the city from the new robot force of police officers.
In theaters: August 2nd, 2013

Columbia Pictures’ action-thriller Captain Phillips stars two-time Oscar® winner Tom Hanks in the true story of Captain Richard Phillips and the 2009 hijacking by Somali pirates of the US-flagged MV Maersk Alabama, the first American cargo ship to be hijacked in two hundred years. The film is directed by Oscar® nominee Paul Greengrass, from a screenplay by Billy Ray and based upon the book, A Captain’s Duty: Somali Pirates, Navy SEALs, and Dangerous Days at Sea, by Richard Phillips with Stephan Talty. The film is produced by Scott Rudin, Dana Brunetti, and Michael De Luca.
In theaters: October 11th, 2013